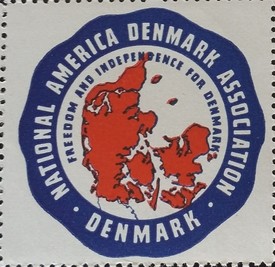 Sticker for envelope to show support for Denmark. Published by the National America Denmark Association. Author's collection.
Members of over 500 Danish-American organizations, churches, institutions and clubs supported Denmark through volunteer work and donations during the German occupation of Denmark. The nationwide organization National America Denmark Association was created as an umbrella organization for all the organizations and activities, including fundraising for Danish refugees in Sweden, shipments of care packages to Danish sailors, showing public support for Denmark, and collection of clothes to send to Denmark after the war.

In the spring of 1942, the Danish American War Bond Committee was created and the first public war bond drive took place at a ball to celebrate the birthday of the Danish King on May 14, 1942. While there are no statistics for the outcome of the Danish-American war bond drives, in California, they were so successful that a Liberty Ship was named for the famous Danish California pioneer Peter Lassen. Danish-American efforts in New York State raised $22 million. Specific Danish-American events were held to sell war bonds, e.g., Denmark Day at Victory Square in Seattle in the summer of 1943 and Denmark Week in Worchester, MA, in November 1944.
Sources:

Caspar H. W. Hasselriis, Danmark i USA under Besættelsen [Denmark in the USA during the Occupation] (Copenhagen, DK: Forlaget Sixtus, 1978).